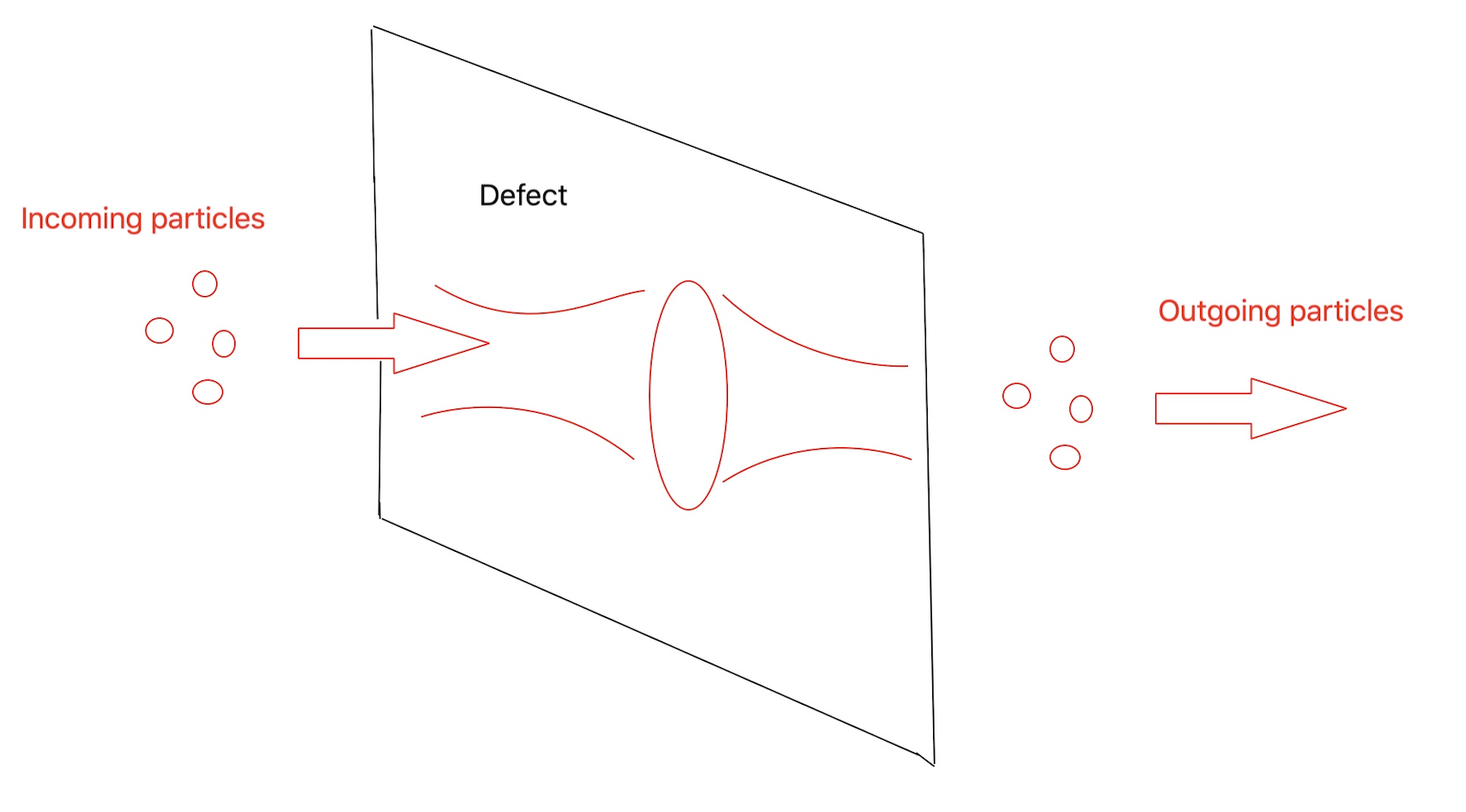 Obtaining exact solutions in quantum ﬁeld theory (the theory studying quantum mechanical properties of subatomic particles) is one of the most important goals of modern physics and it is still far from being achieved. In most of the cases perturbation theory and standard Feynman diagrams techniques are the only tools that we can use to handle real physical processes but unfortunately they become more and more inadequate as the interaction force becomes strong. The impossibility to access to this interaction regime leaves us unable to complete understand many physical processes including for example Quantum Chromodynamics, the force keeping quarks bound together inside protons and neutrons, the same particles that compose the universe in which we live. When we accelerate particles in colliders this force becomes small and the quarks inside protons are free to move as they want.

Indeed at high energies quarks are asymptotically free and they do not behave as a single body, the proton, but rather as many components of it in such a way that we can keep track of them. On the other hand at the energy scale of the life of everyday quarks are completely hidden, ﬁrmly frozen in atomic nuclei, so that it is completely impossible to ﬁnd an isolated quark in nature. They are like connected to each other by little springs of inﬁnite force to form protons and neutrons. A complete mathematical formulation of this phenomenon, as well as other involving non-perturbative physics, is still lacking and it needs a strong intellectual eﬀort to be understood. For this reason in the last years new theoretical tools to unveil non-perturbative properties of physical systems have been studied for some classes of quantum ﬁeld theories. In doing this a fundamental role is played by symmetries. What often mathematicians and theoretical physics do is not to study a certain real phenomenon, that is generally too diﬃcult to face it directly, but rather to study a more symmetrical model and come back to the original one applying a deformation of the latter. Computations that are incredibly diﬃcult become often straightforward problems and acquire a very simple structure when they are seen under the light of the symmetries in play.

We can think for example to the orbits of the planets around the Solar System. It is in general extremely diﬃcult to evaluate these orbits considering only the forces acting on these bodies and ignoring all the rest. If instead we realise that there is a rotational symmetry in the problem (the gravitational force of the Sun on other planets indeed does not have any preferred direction) we will make our life a bit easier. The rotational symmetry manifests itself in the conservation of the angular momentum and constrains the planets to move in ellipses lying on ﬁxed planes. This is incredible! We have converted a three-dimensional problem (planets moving in the space) into a two-dimensional one (planets moving on planes). The rotational symmetry has extremely simpliﬁed our life. This fact is not an accident of the Solar System but happens always, any time there is a symmetry we can ﬁnd a charge (or equivalently a current) associated to that particular symmetry that is conserved in time (in the particular case of Solar System that charge is the angular momentum and the fact that it is conserved constraints the motion of the planets from three to two dimensions). Also in the microscopic world, at subatomic scales, symmetries when are present help us to solve problems apparently impossible. In many cases calculations that could be done only computationally can be avoid and physical observables can be found only with the help of such symmetries.

In this sense Toda theories (a particular class of quantum ﬁeld theories) are really special. They own an inﬁnite number of hidden symmetries producing an inﬁnite number of higher spin conserved charges in involution. While it is possible to study scattering processes between particles using Feynman diagrams techniques and completely ignore the presence of such conservation laws, it is deﬁnitely simpler to use these conserved charges to constrain and solve the equations of motion. In this sense we can start from some axiomatic assumptions on the structure of the S-matrix (the operator containing all the information on particle-collisions), and ﬁnd all the quantities of the theory in a quantum exact way. In this sense we say that these theories are integrable, that is exactly solvable. This fact makes these models accessible to mathematics computations whatever is the regime of the force in play, being able to shed new light on strong interaction.

In this framework the study of defects (i.e. internal boundaries of the theory) is of mandatory importance; they indeed represent a quite natural deformation of such ideal models bringing them closer to the real physics systems. Defects are walls on which particles can collide and the manner in which they collide depends on the particular kind of potential lying on these walls. Some applications of defects in physics can be found in the study of topological phases of condensed matter, entangled systems separated by domain walls, but also in string theory where boundaries and defects arise quite naturally.

In our case we start from a particular class of classical models with integrability-preserving defects, i.e. we consider walls preserving the conserved charges of the original theory. These barriers have been studied in the past and it has been found a particular potential-structure so that an inﬁnite sub-set of currents can cross them without being dissipated. We addressed the following question: “Can we promote such defects from classical objects,described in terms of wave functions, to quantum potentials preserving their integrable nature?”. In other words the question that we tried to answer is if we can scatter particles with such impurities preserving the quantum numbers and the momenta of the interacting particles. This is a non-trivial request, indeed the quantum mechanics laws allow in general to modify the nature of the colliding particles. For example if we throw a “red” particle against the left face of the defect a “blue” particle could emerge from the right face. This is an example of defect non-preserving the original symmetries of the problem (contrary an example of charges-preserving defect is shown in ﬁgure 1).

If these barriers can be promoted to be integrable quantum objects they preserve the charges of the original theory at any loop order. This property can then be used to determine an exact quantum description of the scattering between particles and defects using only axiomatic properties (that continue to be valid also in regimes which are inaccessible to standard perturbation theory).

Studying the conservation laws of these models we have discovered that, except for the energy and momentum that can be properly redeﬁned, higher spin conserved charges are spoiled by defect quantum ﬂuctuations. Loop corrections due to small perturbations of the defect potential around its classical value produce anomalies that at quantum level destroy the integrable nature of the theory. In this sense it is not possible to extend the axiomatic principles in a straightforward way, because the symmetries are destroyed by quantum eﬀects. Despite this negative result, it might be possible to restore integrability studying these defects in a more general scenario, for example adding additional degrees of freedom (particles) living on them.

The investigation of such phenomena is interesting since it represents one of the most direct connections between standard perturbation theory and a diﬀerent non-perturbative approach to quantum ﬁeld theories, highlighting possible new techniques to ﬁnd exact results for physical systems.